More about getting hit by a car

The driver said he never saw me (blinded by the sun), which means he would have hit me at full speed (speed limit 55mph). I was going 13mph up a hill according to my Garmin data at the time of impact. I was thrown into the air, landed in the windshield, and then ejected at the approximate speed the car was going when the driver slammed on the brakes. This led to severe road rash on top of my foot, which had been pulled out of my shoe by the impact. The road rash was deep enough that it removed a significant portion of the tendon connecting my big toe. I also had a bad concussion, broken tooth, and some bad road rash all over. The road rash on my foot required multiple frustrating surgeries. I can walk mostly without a limp, now (four years later), although there are some lingering issues with not being able to bend my big toe at all.

I have no memory from the moment of impact. The whole day seems fuzzy, but I do remember buying gatorade (or powerade) at a gas station about 10 miles before getting hit. My first memories afterwards are in the hospital ER, so no memories of the long ambulance ride. It's as if the time has just vanished. Also, unlike the first time I was hit and ended up in the hospital, I don't even have a specific "first memory" in the hospital. I was told later that I was conscious nearly the entire time and was just repeating my wife's phone number over and over again. They wrote it on my bed, they wrote it everywhere to try to let me know that I had already told them. I have no memory at all of this.

Surpisingly, and almost coincidentally, it was on the four year anniversary of getting hit that I rode on Co Rd 55 again. On one of my commutes home from work, I ended up in some bad traffic on the steep Hugh Daniel climb because school had just let out. This led me to go back the next day slightly before school got out to measure the difference in the number of cars (and passing speeds). A good scientist wants to collect as much data as possible, so I went out again a couple more times during the week. I also wanted to get some weekend data, so that Saturday (which happened to be the four year annivesary of getting hit), I rode out to Hugh Daniel and continued on over to the other side wanting to add some distance to my Saturday ride. Spontaneously, while deciding where to go next, I decided to head out to Co Rd 55 remembering it was the four year anniversary from a Facebook memory I saw in the morning. So I thought that in the middle of collecting data about a different ride, how appropos to also collect data on the road that started this project!

* Note that this data is collected from a single ride. I haven't been back to that road again. Maybe I will, but probably not. Still, this data does fit my memory of traffic on the road which I had ridden multiple times prior to being hit.

County Rd 55, itself, is a long road traversing Shelby County. The section of Co Rd 55 where I got hit connects AL State Hwy 25 with Old US Hwy 280. Here are the stats on that segment.

* Note that this data is collected from a single ride that occurred four years after getting hit at the spot marked below. 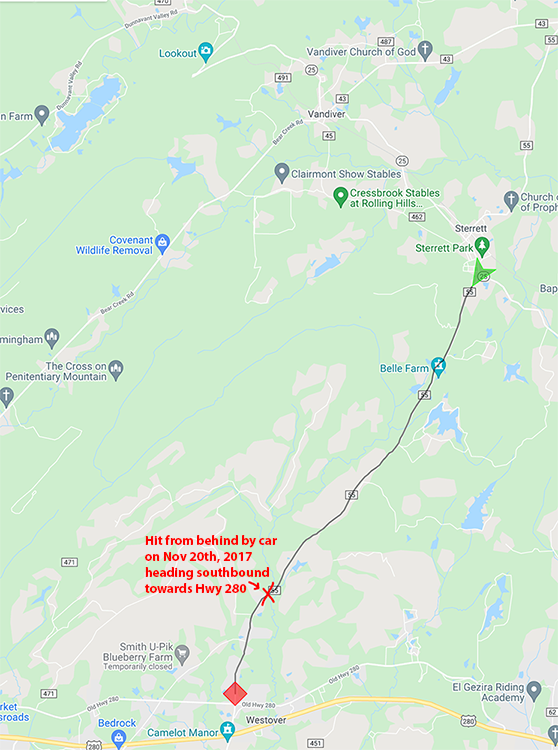 By uploading a ride and/or using data/visualizations from this site to make or guide any route decisions, you are agreeing to release mybiketraffic.com and its developers/owners from all damage claims, injury claims, or claims of any kind related to your usage or other people's usage of the site or any data/visualizations from the site. DO NOT UPLOAD OR USE THIS SITE AT ALL IF YOU DO NOT AGREE TO THESE TERMS. LEAVE IMMEDIATELY. This message is prominently displayed because this site makes no claims that using this site will keep you safe or safer. Also, you should have no expectation of privacy when uploading rides to this site.